I. The geology of Ohio can be divided into two parts–– the Western part and the Eastern part. The Western part of the state is based with limestone (most typically the magnesium-rich “dolomite”). Limestone is not very resistant to the humid climate, so over millions of years of erosion, the Western part is relatively flat. The Eastern part of the state is based with sandstone, and in the Cleveland area, is also based with shale. Sandstone is more resistant, and shale is less resistant, so millions of years of erosion has lead to the creation of deep valleys, the resilience of “higher land”, and in the Cleveland area, created hills of sandstone.

II. The difference between the rocks in these two regions can be explained by examining the original horizontal sequence of the sedimentary rock strata in Ohio. The original sequence of rock was sandstone at the top, followed by shales, followed by limestone at the bottom. It is described that before erosion began, these layers were tilted slightly to form a low arch, likely the result of the activity that formed the Appalachian Mountains. The arch was the highest where the rock was exposed North-South through Western Ohio, the essentially flat part is located in Western Ohio, and further to the east, away from the highest part of the arch, the sandstone remained strong, resulting in sandstone hills. The erosion of all the limestone in the West, and sandstone and shale in the East, is due to the Teays River, a stream that existed before the glaciers. The river ran for about 200 million years, and worked to erode land throughout the whole duration. The river was curtailed by the glaciers of the Ice Age less than one million years ago.

III. The Pleistocene glaciers were slowed down by the steep-sided sandstone hills residing in Eastern Ohio. As a result, the glacial boundary is no more South than Canton. 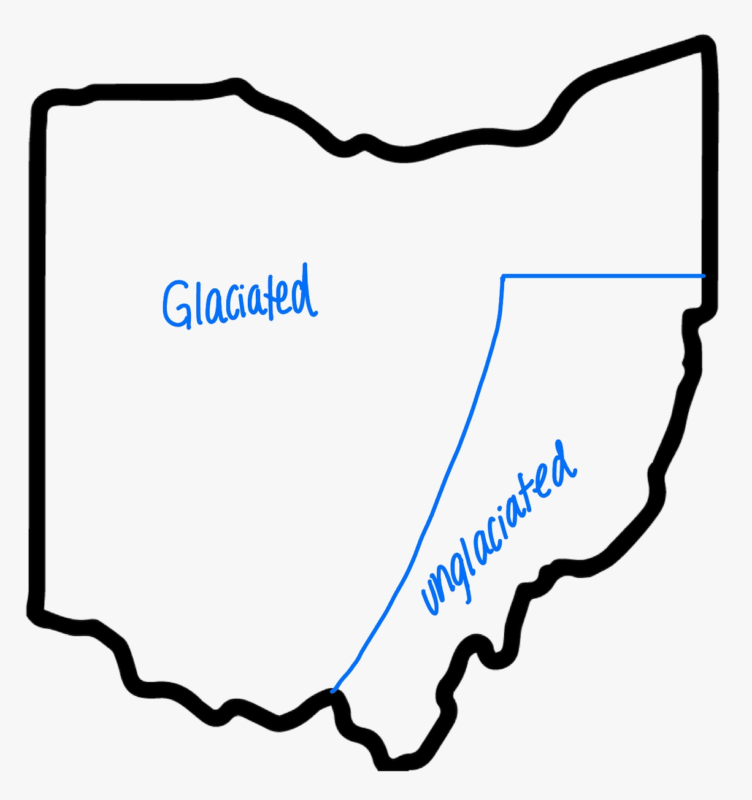 V. In Western Ohio, the basic substrate is limy, clayey (relatively impermeable soil), high in lime, is poorly drained, and inadequately aerated. It is rather abundant in nutrients. Water does not soak quickly into the soil, but rather, remains on the surface. This makes for low oxygen conditions when wet, and bad droughts when dry spells occur. In Eastern Ohio, the basic substrate is very acidic, low-nutrient, has a supply of moisture that is abundant and cool when retrieved from springs, and benefits from the permeability of the sandstone. In areas where shale is present, its impermeability means that surface water will run off, rather than be absorbed, and within layers of soil, the water traveling through the permeable sandstone will be stopped by shale and routed through hillsides as springs.

VI. Species of trees/shrubs with distribution generally limited to limestone or limey substrates

VIII. Species of trees/shrubs with distribution generally limited to the sandstone hills of Eastern Ohio

IX. Sweet buckeye does not occur inside the glacial boundary. This is thought to be due to that fact that they were unable to repopulate in the clayey, high-lime glacial tills. The sweet buckeye is also unable to extend North past the glacial boundary in Eastern Ohio. This is thought to be due to general climate factors. Hemlock can also be found in the unglaciated region of Eastern Ohio, however, its distribution also extends into the North past the glacial boundary.  This Northern presence is thought to be due to the fact that hemlocks like the consistently cool and moist environments–– like those at the bottom of the deep valley’s of cut sandstone, where they receive cool spring water or the valley’s in the North that contain some till but are cool and moist due to the fact that they are deep and open to the North.

Hemlocks are still able to be present in the regions North of the glacial boundary because while the till thickness is greater, and this results in relatively less acidic soils, the North-facing valleys make the environment cool and moist enough to grow. Overall, the sweet buckeye is restricted to unglaciated areas, and the hemlock is able to occupy the valley-bottom sites within sandstone.

Rhododendron is present South of the glacial boundary, so their distribution might suggest that they belong in the mixed mesophytic association in Ohio, even though they are not present everywhere throughout the unglaciated area. It is thought that this species was one that began living in the Appalachian highlands, and was able to migrate down from the North into Southern Ohio through the Teays River system.

I. Cedar Bog is not actually a bog, but rather a fen! The characteristic trait of a fen is that it is able to “flush”. Essentially, water enters the fen through rain and through springs, but small streams allow them to drain. The groundwater contains limestone, which makes the water alkaline to neutral and clear. Sedges are able to grow here. 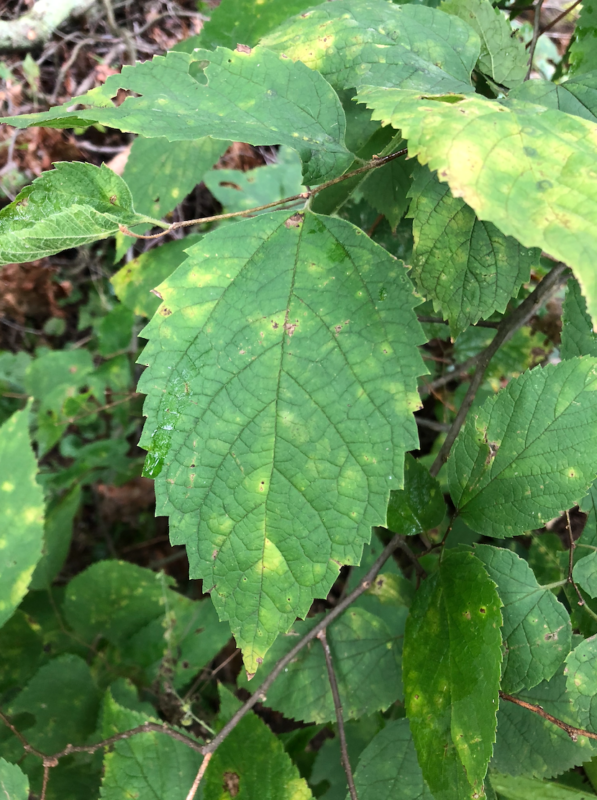 You can recognize this plant by its alternate and simple leaves, the sharp toothing, and the way that the three main veins emerge from the base of the leaf. This fruits of the hackberry are sweet, and were used by Native Americans to season meat and add flavor to corn cakes. Additionally, the hackberry’s leaves will turn yellow in the fall, and are one of the first trees to begin showing their fall color.

III. Plants and their CC Values